The Global Reporting Initiative (GRI) is an international nonprofit founded in the early 1990’s that provides structure and guidance for  sustainability reports published by business, government, and other organizations. GRI’s standards address topics across the sustainability spectrum, from climate change and water management to human rights and incidents of corruption. Over the years, GRI has become the de facto standard for sustainability reporting, with thousands of organizations in over 90 countries referencing GRI in published reports.

In 2013, GRI released the fourth iteration of its reporting guidelines, the G4 Sustainability Reporting Guidelines. In 2016, GRI changed course from past practice, introducing the Sustainability Reporting Standards, which reporting companies are expected to transition to by July 1, 2018. While GRI’s content has remained largely the same in the transition from G4 to the Standards, its terminology and structure have evolved. The shift from ‘Guidelines’ to ‘Standards’ is intended to communicate increasing rigor and credibility for the reporting framework and those who use it. The Standard now includes more clarity around what is required, what is recommended, and what is considered guidance.

The Standard is comprised of three universal standards:

In addition to the universal standards, there are 33 topic-specific standards, each covering a sustainability topic. These topics are continuations of the ‘Aspects’ included in the legacy G4 Guidelines, and continue to be organized across three areas: economic, environmental, and social. Organizations are advised to report only on topics identified as material – economic, social, or environmental impacts of the greatest concern to the organization and its stakeholders. 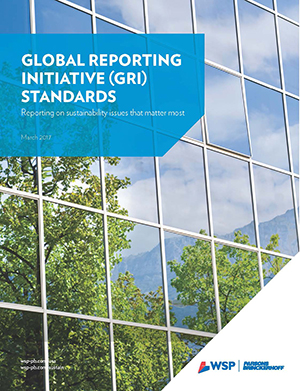 The new modular structure of the Standard enables GRI to update sections or ‘modules’ of the Standards on a more frequent basis than the legacy G4 Guidelines or earlier iterations. In 2017, GRI has indicated that it plans to focus its updates on water, effluents and waste, occupational health and safety, economic performance, and human rights-related standards. These updates will be made by the Global Sustainability Standards Board (GSSB), an independent entity established by GRI to strengthen the process for developing and approving standards moving forward. The GSSB adheres to the GRI mission and vision, and works in the public interest to ensure that the Standards are globally acceptable.

For an in-depth look at the GRI Sustainability Reporting Standards, download our white paper by clicking the image.