Noise is an inevitable part of everyday life in a today’s rapidly growing world. Traffic noise is one of the most common noise sources that has the potential to adversely affect communities. But how do we minimize traffic noise impacts while still trying to maximize capacity and efficiency? Many transportation departments across the country are experimenting with utilizing shoulder lanes during peak commute hours to reduce congestion. However, using shoulder lanes will move traffic closer to nearby sensitive receptors such as homes, schools and places of worship which may result in greater noise impacts on these sensitive receptors. Determining the extent of the noise impacts is required to evaluate noise abatement and further weigh the pros and cons of the project.

An example of the debate for using shoulder lanes is the Washington State Department of Transportation (WSDOT). WSDOT is considering repurposing shoulder lanes during peak congestion hours along Interstate 90 (I-90), approximately 10 miles east of Seattle between the cities of Bellevue and Issaquah. The proposed improvements would involve re-striping and shifting of current travel lanes to allow for an additional shoulder lane within the same roadway footprint. As shown in Figure 1, electronic signage would signify to drivers if a shoulder lane is open or closed for vehicular traffic and all vehicles, with the except of heavy trucks, would be permitted to use the shoulder lane. 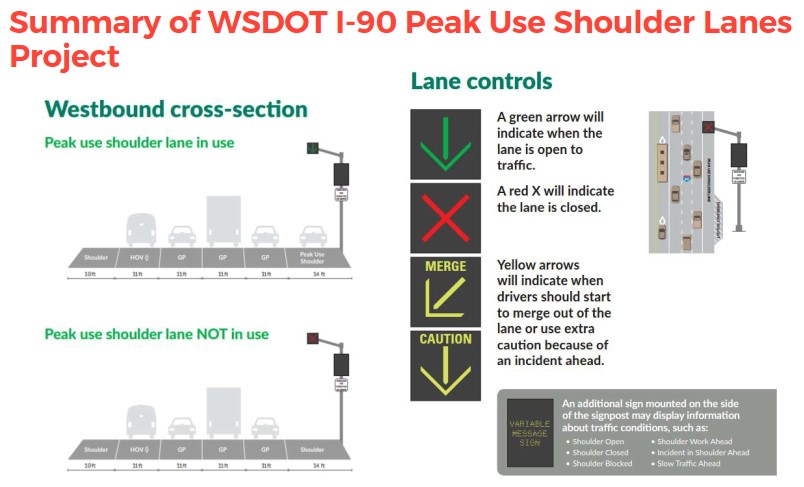 As a part of the evaluation, a traffic noise study for the project was completed to assess future noise levels with the peak shoulder lane in use. Field noise measurements were completed and future noise levels were predicted using Federal Highway Administration’s (FHWA) Traffic Noise Model (TNM). Because this is a heavily traveled corridor, the noise study identified many noise-sensitive sites expected to be impacted by traffic noise levels in both the existing and build (peak shoulder lane) condition throughout the project area. Based on the finding, our team recommended four noise barriers to be included in the project to mitigate traffic noise. 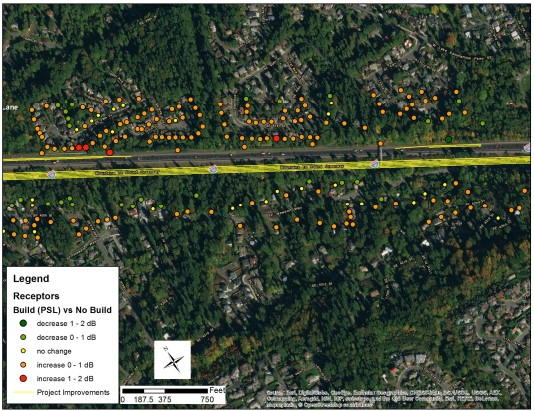 The results of the supplemental modeling indicated that, in general, minor changes in noise levels of +/-1 dB can be expected from an outside peak shoulder lane used by 20-30% of vehicles and heavy trucks restricted. The difference in noise levels with and without the peak shoulder lane were slightly larger at locations where there was a clear line-of-sight to the highway, such as at residences elevated above a roadway in a cut. The results were generally consistent with the change in noise levels shown in the I-90 peak shoulder lane study and a summary of the project and supplemental modeling was presented at the Transportation Research Board (TRB) ADC40 Transportation Noise and Vibration committee conference. Figure 2 shows an example of the model results.

The traffic noise analyses WSP completed showed that peak shoulder lane projects will generally result in a minimal change in noise levels at nearby sensitive receptors. Utilizing shoulder lanes during peak periods can be a cost-effective and practical design strategy to improve highway traffic flow.

Jacob is an acoustics and noise control consultant specializing in conducting noise and vibration assessments for a wide variety of highway, transit and rail, power generation and construction projects along with architectural acoustics and mechanical noise control work.