On the flip side, when existing structures are found to be affected by vapor intrusion from historical contamination, vapor mitigation can be particularly challenging due to the ongoing use and occupancy of the structure. WSP USA recently encountered such a challenge at a manufacturing site in Arkansas where we are remediating groundwater contaminated with trichloroethene (TCE). TCE migrated 1,000 feet through bedrock flow and created an urgent need for vapor mitigation at an adjacent, 25,000-square foot strip mall.

Our objective was to successfully reduce vapor intrusion at the existing commercial structure without causing business interruption through an innovative approach to vapor mitigation. Rather than 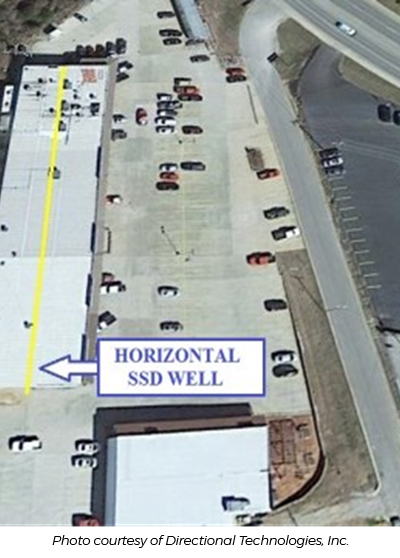 disrupting business to install vertical well points and infrastructure, we selected a new approach of installing a horizontal well under the building slab to intercept vapors by creating a vacuum-induced sub-slab depressurization system. The 300-foot long, three-inch diameter high density polyethylene well was installed directly beneath the gravel subgrade of the floor slab, during normal working hours, without requiring entry or disturbance of any business activities. The slotted well provided over 250 square inches of open space evenly distributed along the length of the pipe, providing the equivalent of 22 vertical wells in a single, horizontal application.

Once installation of the horizontal well was complete, short-term testing was needed to determine the vacuum and flow requirements for inducing a pressure differential under the footprint of the building to counteract the positive pressure, which was causing vapors to enter the structure. Borrowing from conventional practices for sewer cleaning, we utilized a vacuum truck for a one day, multi-step pilot test. This allowed us to determine and select equipment that had adequate capacity to mitigate the intrusion of TCE vapors. A 7.5-hp regenerative blower was selected which is designed to remove 400 standard cubic feet per minute of vapor from the gravel subgrade. This flow rate is equivalent to the hourly evacuation of six volumes of the vapor present in the gravel pore space before it can penetrate the structure.

Since completion of the installation in 2016, four rounds of indoor air sampling have consistently demonstrated a reduction of indoor air concentrations to levels safe for public occupancy. Our team is continuing to remediate the contamination at the source to provide a permanent solution, and remains ready to apply innovative approaches to vapor mitigation, like the one described above to ensure the safety and protection of human health.

Steve is a vice president and professional engineer with 38 years of experience in engineering and construction of civil and environmental systems for remediation, restoration and site development. His expertise includes the evaluation of potential environmental liabilities and the development of sustainable plans for the restoration and beneficial use of land and water resources. He manages on-going large scale projects for key clients and provides peer review for the firm’s projects throughout the U.S.