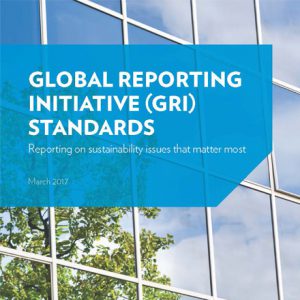 The Global Reporting Initiative (GRI) is an international nonprofit founded in the early 1990’s that provides structure and guidance for  sustainability reports published by business, government, and other organizations. GRI’s standards address topics across the sustainability spectrum, from climate change and water management to human rights and incidents of corruption. Over the years, GRI has become the de facto standard for sustainability reporting, with thousands of organizations in over 90 countries referencing GRI in published reports. In 2013, GRI released the fourth iteration of its reporting guidelines, the G4 Sustainability Reporting Guidelines. In 2016, GRI changed course from past practice, introducing the Sustainability Reporting Standards, which reporting companies are expected to transition to by July 1, 2018. While GRI’s content has remained largely the same in the transition from G4 to the Standards, its terminology and structure have evolved. The shift from ‘Guidelines’ to ‘Standards’ is intended to communicate increasing